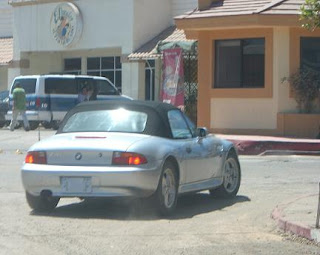 Here’s the first BMW sports car that I have seen in Loreto. It had no plates, so it had to be owned by a local Mexican. Bumping along the dirt roads under construction, it still caught my eye, but did not look as out of place as it may have a year ago.

Also, this week I saw a delivery truck full of newer cars stopped in Loreto. These are the first steps towards a growing economy. Also, cruising around town are some new dune buggies that are serious enough to race in Baja 1000. Many Mexicans are now cruising the malecon on new ATVs and scooters. Boys and Their Toys is a universal concept.

I was on my way to Nellie’s Place following a typical Mexican truck. What caught my attention was that there were comfortable high back seats in the back where the two kids were enjoying the ride. The backdrop of the massive Holland America cruise ship was a sharp contrast to the Ford pickup on the currently torn up local streets. My first thought was “How Bizarre?!”

Many VIPs in Loreto, Including President Calderón of Mexico

There have been many big events this week in Loreto. The first was the live concert of Los Tigres del Norte, who have a career span of more than three decades. Millions of records sold, extensive concert tours throughout the United States, Mexico, Latin America, Europe and Asia, have made Los Tigres Del Norte international legends.

The outdoor concert was at the Stadium on Sunday night and advertised to start at 10 pm. Having had a very relaxing day off and a busy Monday ahead, I thought what the heck ... I will go and check it out for a couple of hours. We went about 9:30 to grab some food and good seats. The doors opened at 10 pm and there were big signs that said “No Hay Salida” which I found confusing because how would we get out?

We knew we were in for a long night when they were just starting to set up the massive stage when the doors opened. The stage was grand enough for a large rock concert and the Tigres had at l…
Post a Comment
Read more
- April 15, 2007

A Time of Change / The Anti-Cabo

I am attaching a link to a recent article in USA Today. http://www.usatoday.com/travel/destinations/2007-04-05-anticabo-loreto-mexico_N.htm?POE=click-refer

Loreto is no secret and it is getting worldwide press as more and more people are enamored with all it has to offer. I am enclosing some photos taken of the surrounding areas on one of my afternoons off exploring about 35 kms north of Loreto.

I have been called a Change Agent, among many other things not so complimentary. A change agent, or agent of change, is someone who intentionally or indirectly causes or accelerates social, cultural, or behavioral change. I do not view myself as a person who seeks radical change or one that necessarily wants to influence the decisions of others. Rather, I try to provide pros and cons of choices based on education, experience, and intuitive powers gained over many decades of living on the edge. 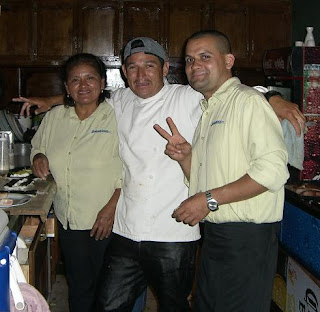 From Scottsdale Fast Cars to Sushi in Loreto …

What a whirlwind week! It is Semana Santa or Holy Week in Mexico and there is almost no business conducted outside of the hospitality industry. Yolanda, Edgar and Julio worked diligently throughout the holiday to ensure everyone had a great time at Nellie’s Place. All hotels were full and the beaches and campsites were wall-to-wall packed with families enjoying the largest holiday outside of Christmas. Since I now try to act Mexican, I thoroughly enjoyed my week off away from the office.

My short trip to Scottsdale was heaven. I stayed with my friend Jessie in her new custom home, complete with pool, wine cellar, and built-in Miele Coffee Dispenser which was like having a personal barista on call 24x7. My chariot of choice was a Lincoln Aviator or BMW M3. I was thrilled to see my little Mercedes C240 in Jessie’s garage waiting patiently for the day I would return to take her away. The way Loreto is growing, it may be sooner than I …
Post a Comment
Read more
More posts